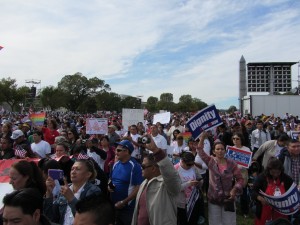 People from all over the country once again came to DC to push for immigration reform. The rally held on the Mall during the government shutdown, gathered thousands. Artists, activists, politicians, faith leaders and others took to the stage calling on federal officials and Congressional leaders to pass an immigration reform bill now.

The rally was preceded by a call for community marches and demonstrations throughout the nation on August 5th. As many as 40 states held such events in large and small cities throughout the country. Pro-immigrant groups say they will continue pushing for immigration reform, and won’t stop until Congress passes a bill that will legalize as many as 11 million people living in the US undocumented. Children also took to the stage. Some of these children had one of their parents deported.