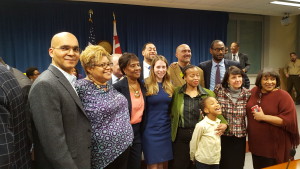 The DC Democratic State Committee (DCDSC), the local arm of the DNC in in the Nation’s Capital, elected 12 members to its body. The election took place on March 2, 2017 at the John A. Wilson Building. Eight females competed for 6 spots on the Central Committee, and twelve males also competed for 6 spots. The candidates made 90 seconds presentations to the voting body of the DCDSC, in the hopes for a seat on the Committee. Candidates ranged in age, professions, and ethnicity. There were attorneys, veterans, college students, and immigrants who run for the 12 seats. Alexa Wertman, a female candidate who won a seat, talked about her background as the child of an immigrant and her contributions to the Party, Estell Lloyd, a retired DC Council staffer, talked about unity, and the need to come together to strengthen the Party, they both were elected. Robert Brannum, a veteran, who recently made headlines, while running as Chair of the DNC, did not make the cut. But Chuck Rocha, a political consultant to the Bernie Sanders for President Campaign, and a new face to local DC politics, managed to convince enough DCDSC members to get a seat on the Committee.

The 12 Add-On members, elected for a 2-year term to the DC Democratic State Committee were: