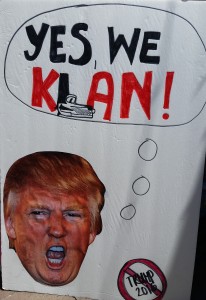 a vague statement from the FBI Director, James Comey, Donald Trump believes he can now keep people away from the issues, and focus on Secretary Clinton’s emails. He thinks that reminding people of an issue that has been discussed for more than 17 months, will somehow get people to vote for him, like him, or forget what he stands for. No doubt some will find Mr. Trump entertaining, and he may succeed at getting some people to go with one of the aforementioned options, but the American electorate is diverse. There is a reason why since winning the Republican nomination, Mr. Trump has always trailed in the polls against Secretary Clinton. And he is trying to get the American people to forget why they reject him.

Mr. Trump started his presidential bid on June 16, 2015 by calling Mexican immigrants rapist and criminals, and calling for the deportation of some 11 million people, including young people called Dreamers, that were brought to the US when they were children. He then went on take on the Muslim community, by calling for a complete ban of all Muslims entering the country; banning admission to the country based on people’s religious affiliation. He has consistently praised the leaders of Russia and China, trashing the US in the process, to score political points. He’s mocked a physically challenged reporter, and said Senator John McCain was no hero because he got captured. He has a lifelong history of being abusive and denigrating women, and in his latest revelation admits that he likes to engage in sexual assault to women. This is but a short list of why Americans reject him.

Mr. Trump’s disparaging statements are usually full of stereotypes and demagoguery, what is always lacking is substance. His main slogan throughout the campaign has been to “make America great again.” This loaded phrase is one example of Mr. Trump’s lack of substance and logic. One would imply from this statement that Mr. Trump is making reference to a prior time in American history. But it is unclear what period in America’s history Mr. Trump refers to in his “make America great again” statement. Common sense intuition lead us to believe that he isn’t talking about the 8 years of the Obama Administration, or any period in recent history when a Democrat was in office. This is an assumption, which is what you have to do with most statements Mr. Trump makes. So going back through history, it is unclear what period Mr. Trump is talking about. He declared bankruptcies twice during President George W. Bush (2004, 2009), and at least twice during Reagan/Bush years (1991, 1992). The Nixon/Ford administrations have been well documented to be the worse administrations in American history (Nixon is the only President to have resigned from office), Ford’s was so bad he only served reminder of Nixon’s second term. And we know any period before the 1960’s weren’t so great for many Americans: African Americans, Women, Hispanics, LGBT Americans, Asian Americans, were groups of Americans that only after the 1960’s, in slow motion, began to see a “great America.” Yes, perhaps it may be true that America may have been great for a few White man that benefitted while minority groups were been oppressed, but the evidence suggests that nations prosper most when all of its citizens can be fully participatory members of a society. So it is unclear when in history is this time period that Mr. Trump wants to take America back to.

I believe Americans won’t be fooled by the distraction Mr. Trump rambles about on the campaign trail. We are, for the most part, concerned about an incompetent and divisive candidate that aims to divide this country and its people; even members of the Republican Party 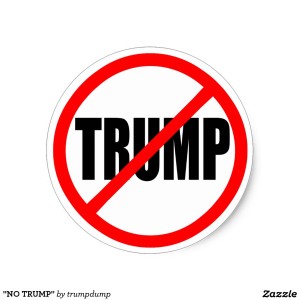 are divided on supporting him.

I believe Americans ultimately are concerned about putting in place practices and policies that take us back to a shameful, and dark time in American history. That is why they will reject Donald Trump on November 8th.