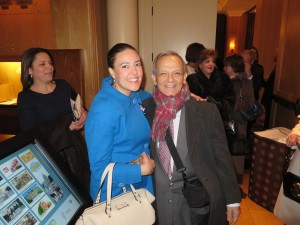 Over a 100 guests attended the 2014 Solidarity Dinner at the St. Gregory Hotel in Washington DC.  The event held on February 17, was put together by the DC Latino Caucus, the DC Muslim Caucus, and the DC Asian American Pacific Islanders Caucus as the first annual event bringing together these communities in the DC Metropolitan area.  The purpose of the coalition was to set the tone in the city as the city moves to the end of an election primary, scheduled for April 1st.  It was also an opportunity for each Caucus to honor a member of its community.   The DC Latino Caucus honored Prince Construction President, Alberto Gomez.

Alberto Gomez has lived in Washington DC for the last forty years. Mr. Gomez is the owner and President of Prince Construction Company and has committed most of his life to advocate for education, immigration, housing, and small business development.  He has served on the boards of the DC Chapter of the American Red Cross, the DC Commission on Homelessness, the Convention Center Authority, the PLA for the construction of the Nationals BallPark, the Anacostia Development Corporation, and many other organizations. He is also the current Chair of the Board of Trustees of the Carlos Rosario Public Chartered School, and is on the board of directors of the National Children Medical Center.  Mr. Gomez is a graduate of George Mason University and is married to Cristina; they have two daughters: Angie and Carolina.   Mr. Gomez is currently awaiting a heart transplant.

Mr. Gomez was presented with an award at the dinner by the General Council of Colombia, Dr. Libia Mosquera Viveros.  He also received an additional recognition award from the DC Latino Caucus, presented by DC Latino Caucus Vice President, Gabriela Mossi.

Mr. Gomez was an award recipient along with Dr. Natwar Gandhi, former Chief Financial Officer for the city and, Mr. Omar Karim, President of Banneker Ventures.  Dr. Gandhi and Mr. Karim were not able to attend dinner.

The dinner ceremony is recorded and can be seen below.  Mr. Gomez’s presentation starts at around 10:50.