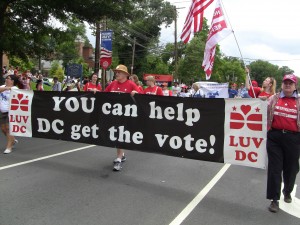 DC residents formed a Statehood coalition and marched on the 4th of July Palisades Parade. In addition to members of the DC Statehood delegation, other groups who joined the coalition included, DC for Democracy, Ward 3 Democrats, DC Latino Caucus, and the National Alliance for DC Statehood. On its 47th year, the 4th of July Palisades Parade has become a tradition for locals, specially politicians.

Floats and various delegations line up in the morning and parade along MacArthur Boulevard in the Northwest part of the city. There is no fee or registration required to participate. The 4th July Palisades Parade is put together by the Palisades Citizen’s Association.