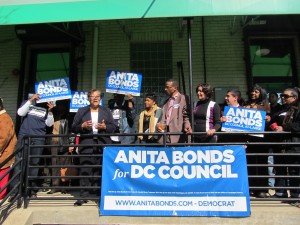 On April 23, 2013, DC voters will have the opportunity to elect a member of the DC Council. The person elected, will fill the remainder term for a vacancy created when Councilmember Phil Mendelson became Chairman of the DC Council last November. Currently Anita Bonds, Chair of the DC Democratic Party, is temporarily filling this vacancy until a permanent person is elected during a special election the city will put together on April 23, 2013.

Initially, voters were going to choose between 8 candidates, which included a Republican, Patrick Mara, A Statehood Green Party candidate, Perry Redd, and 6 Democrats: Anita Bonds (the incumbent seeking to keep the seat), Michael A. Brown, Matthew Frumin, John Settles, Elissa Silverman, and Paul Zukerberg. Mr. Settles and former Councilmember Michael Brown are no longer in the race, leaving 6 candidates for the electorate to choose from.

Articles from Washington Post columnist Colbert I King, and Washington Examiner’s Jonetta Rose Barras, have been critical of Anita Bonds for recent comments she made on the Kojo Nmamdi Show about race. Anita Bonds said that “people want to have their leadership reflect who they are.”

Recent data shows that Washington DC is 51% African American, 39 White, 9% Latino. With 505,403 registered voters, 75% of registered voters are Democrats, 17% Independents, and 6% Republicans. The DC Council is made up of 13 members, including a Chairman. 7 of the 13 members are White, 4 women, 2 openly gay, and at least one is a member of the Jewish faith. 11 are Democrats and two are independents.

I will be voting for Councilmember Anita Bonds on April 23rd because she has brought to the DC Council over 35 years of experience as a public servant, bringing with her knowledge, connections, and integrity, among other things that will benefit the DC Council. I will be voting for Anita Bonds because while working with her on the DC Democratic Party for the years she’s chaired the Party, the Party has been financially sound, and has put together city-wide events for the enjoyment of all Democrats in the city, including two successful delegate selections for President Barack Obama. And I will be voting for Councilmember Bonds, because under her leadership she has ensured that all ethnic groups are represented.

The issue of representation in public office based on race, ethnicity or gender is nothing new. In fact, society has become better, particularly for individuals that were legally excluded from the political process because of their race or gender, when specific approaches have been taken to address these parameters. It is many times the only way we can ensure that Delegates to National Conventions include members of certain minority groups. It is probably the reason why we now have 3 women, including one Latina, in the US Supreme Court, or even how we ended up, after more than 200 years, with the first African American President.

To me the issue of representation on the DC Council is important and personal. Latinos are a growing and influential minority group in the country, and DC is no exception. DC’s Latino population has fluctuated over the years, and is now around 10%. Since Home Rule was enacted in 1973, the first time citizens of Washington DC elected the 13 member City Council, a Latino has never been elected to that body. I would like to see a DC Councilmember that champions DC Driver licenses for our DC immigrant community, like Maryland State Senator Victor Ramirez did for Maryland, that shows up at Immigration Reform Rallies, like all local Latino elected officials did on April 10th , and that looks out for our DC Latino high school dropouts and makes it a priority to address them. Yes, any DC Councilmember, regardless of race, can do these things. I simply never saw any of them do it.