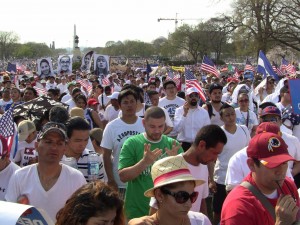 Thousands of immigration reform supporters showed up on April 10th at the West Lawn of the US Capitol to call on Congress to fix immigration laws in the US. The Rally drew people from all over the country. Some of the speakers included DC Mayor Vincent Gray, U.S. Senator Robert Menendez, Congressman Luis Gutierrez, Arlington County Board Chair Walter Tejada, and many other national and local politicians, activists, musicians and religious leaders. Many expect the US to reform its immigration laws this year, which will likely include a path to citizenship for some 11 million undocumented immigrants residing in the US.